Excerpt and Giveaway: Getting By by Claudia Y. Burgoa

Today I'm here to show you a little more about Getting By by Claudia Burgoa, a new adult contemporary romance that will definitely appeal to many with its great characters and plot twists. Read on for an excerpt and giveaway! 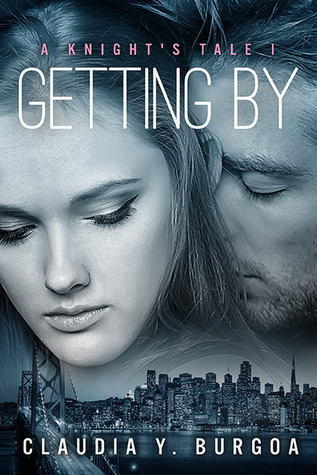 Getting By (A Knight's Tale #1) by Claudia Y. Burgoa
Release Date: February 18, 2014
When Emma Anderson arrived at San Francisco International Airport, she regretted accepting the distinction of being the maid of honor to Gaby’s—her childhood friend—wedding. It had been years since the last time she set foot in Menlo Park, where her parents had been killed. The rug where she had been shoving her feelings since that day looked bumpier than a camel’s hump. Who could blame her; if she hadn’t been selfish they’d still be around. Ever since that fateful day, Emma has been perfecting the knack of Getting By.Cade’s wedding in Menlo Park—a city close to San Francisco—might be the perfect place for Jake Knight to shake the memories of his ex, Emma Anderson for good. Single, available women galore for an entire week was the perfect medication, one he intended to take three times a day for an entire week to return to his player days. It was a plan the former spy thought flawless until he came face to face with the maid of honor. Jake’s perfect retreat turns into a flight, fight or hide week of celebrations.

And here's your opportunity to read an excerpt from the book below.

--------------------------
Nights meant sleep and dreams—my archenemies. The Crowley to my Dean Winchester, the Green Goblin to my Spider-man, the list of superheroes and their opposites was long, and so became the analogies I used on a daily basis. My lack of sleep began with Dad and his conditions for me to continue my art. Then came my parents' deaths. Those took a toll on me because I mixed dreams with realities and hopes. Not once did I have a nightmare, all of them were sweet and real. Seeing Mom and Dad on those nights filled my gut with nails, and my head pounded with the reminder that they were gone the next morning. Those had been merely fantasies that would never become a reality.
For the past three months I had been evading sleep and working overtime, over the overtime. The dreams of elevators, trips to sophisticated-secluded spots after a week of work and delicious nights with a man who I was required to forget in order to move on, came daily—nightly. They not only hit me with vengeance, but they came tangled with what humans liked to call hope. The urge to crawl inside myself to avoid the need of his touch, kisses and whatever it was that we had not long ago, consumed me. If I had the powers to morph into an animal, it’d be a sea turtle and I’d stay inside my shell for the next hundred years. Past the stage of melancholy and into the real world, I pushed my body outside of the bed and into the shower, where I got ready to face the Clements and the house next door.

**GIVEAWAY CLOSED**
Winner: Rachael L.
Thank you all for entering!
Have a good week,
Sam
Posted by Sam at 08:00