Review: A Court of Silver Flames (A Court of Thorns and Roses #4) by Sarah J Maas 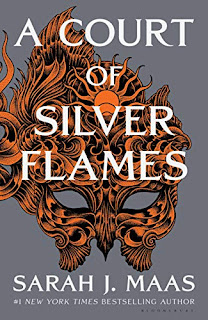 Nesta Archeron has always been prickly-proud, swift to anger, and slow to forgive. And ever since being forced into the Cauldron and becoming High Fae against her will, she's struggled to find a place for herself within the strange, deadly world she inhabits. Worse, she can't seem to move past the horrors of the war with Hybern and all she lost in it.The one person who ignites her temper more than any other is Cassian, the battle-scarred warrior whose position in Rhysand and Feyre's Night Court keeps him constantly in Nesta's orbit. But her temper isn't the only thing Cassian ignites. The fire between them is undeniable, and only burns hotter as they are forced into close quarters with each other.Meanwhile, the treacherous human queens who returned to the Continent during the last war have forged a dangerous new alliance, threatening the fragile peace that has settled over the realms. And the key to halting them might very well rely on Cassian and Nesta facing their haunting pasts.

Against the sweeping backdrop of a world seared by war and plagued with uncertainty, Nesta and Cassian battle monsters from within and without as they search for acceptance-and healing-in each other's arms.

ACOSF stole my heart. After finishing A Court of Wings and Ruin a few years ago, I knew that whatever Maas wrote in her next books in the series would also be the death of me. I was definitely correct on that. I initially was not too excited about this book being about Nesta as she was not one of my favourite characters previously. She's cold and can be extremely cruel and her character was never really developed past that. But oh how that changes in this book. Nesta really said "oh so you want character development? Let me shove that in your face!"

This installment follows the Nesta and the inner circle months after the war in ACOWAR. Prythian is healing from the horrors that hit their home and the human queens are beginning to scheme again. While Feyre and Rhysand are busy looking after the Night court and building their own home, Elain is tending to the gardens around Velaris, Nesta on the other hand is fighting a string of inner demons that have haunted her since she was thrust into the cauldron. She lives on the not-so-nice side of Velaris and aims to distract and destroy herself by any means possible. As a form of intervention, Feyre gives her two options: stay at the House of Wind and train with Cassian each morning while working in the bottomless library beneath. Or pack up and be dumped in the human lands. Thankfully she picks the more exciting option.

The story is told from Nesta and Cassian's perspectives which I really, really enjoyed. Previous books were told from Feyre's first-person POV and it did get tiresome at some points. I cannot put into words how much this book touched me. The themes that were explored include mental health as a broad topic, depression, trauma, and fighting with your inner demons. The themes were incorporated and unraveled with characters who will truly touch your heart. These new characters Emerie and Gwyn are women who have survived horrors and have the courage to tell their stories and fight each day to remember who they are past the trauma that they have experienced. These two characters are so important in Nesta's journey and are now some of my favorite characters.

The library of priestesses played a large role in this book and was important to Nesta's growth as well. I enjoyed learning more about the priestesses here and what they do as this was touched on in previous books but this installment focuses on it as one of the main set scenes. Half-way through ACOSF you will start asking yourself whether you are in love with the House of Wind. Literally. Am I in love with the House? This may have something to do with how the magic of the house enjoys smut and regularly gives Nesta its recommendations.

Nesta's journey itself was what pushed me through this book so fast (okay, fine, and all the steamy scenes). It was so inspiring. I found myself relating to the inner war that she has with herself. A lot of what Nesta is dealing with is something that a lot of people might be able to connect with. She is angry, she is struggling, and she is drowning in her own mind. For her in this story to find her way out of that and find a way to accept who she is with the help of those close to her. That. Was. Everything.

We all knew that this book would be filled with steam. I mean, it's Nesta and Cassian as our main characters how could it possibly not be? But the level of spicy-ness... I was NOT ready for that. This installment is aimed at all of the older readers of ACOTAR that loved the series a few years back and therefore are more mature now. And I like how Maas matured this story to reflect that. You really thought chapter 55 was hot? Okay, speak to me after reading this, please.

I think that because I was so focused on the romance and Nesta's personal journey of "finding her self" (essentially), I did not mind that the overarching plot of the story was slightly weaker. I remember hitting the last hundred pages of this 750-page book and thinking, how in the hell is everything getting wrapped up in such a short space of time. The answer to this is that the ending to this plot was slightly less impactful, and Maas ties everything up quickly within the inner circle at the end to give us a happy ending. It was a solid end to the book but it did leave me wanting a bit more. However, knowing that there will be more books definitely makes me feel a lot better.

A few complaints: there is no Lucien, no Lucien at all. Well, he made like two appearances but if you're looking for your Lucien fix you will not find it here. There is no Mor either, she spends the books dealing with some political conflict across the seas, so don't expect to see her much either. This I found very sad as I love her character and I felt I forget it a little in this book.

Overall, I would definitely recommend ACOSF to any lovers of new-adult/adult high fantasy. The world is crafted beautifully and the characters are so developed at this point in the ACOTAR series that they all just feel like family. Here's how I'll try to sum up the best bits of this book: steamy romance, Nessian, the amazing handling of important themes, impactful strong female characters, the beauty of friendship, the importance of reaching out your hand to someone struggling, Cassian being amazing, Cassian being everything I could ever want, Cassian and Azriel.