My review of The Awakening + The Struggle


This wasn't what I expected. 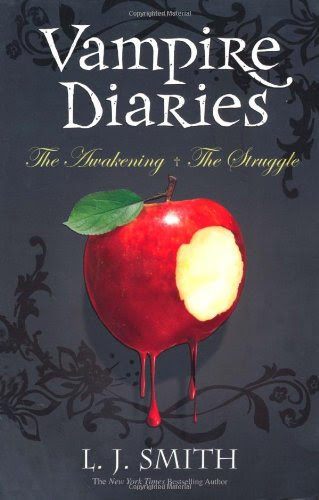 The Awakening: Elena Gilbert is used to getting what she wants and she wants mysterious new boy, Stefan. But Stefan is hiding a deadly secret - a secret that will change Elena's life for ever ...
The Struggle: Elena is torn between her boyfriend, Stefan, and his brother, Damon. But these brothers hide dark secrets and a tragic past that threatens them all. Damon wants to lead Elena astray - and he'd rather kill Stefan than let him possess her...

That all sounds great right? Well, think again. It's not. I approached this series with high expectations. There has been SO MANY vampire stories, I wanted something different and unique. Sadly, this book didn't deliver. At all. You'd be better off reading the Twilight Series.

1) Characters
Elena; blond, full of herself, boy-obssessed, whiny and annoying. She didn't do it for me. She was so PREDICTABLE, I hate that in a character. She was so......stupid. STUPID. She dates guys who drink from her?

Stefan, he sounded so gorgeous and dreamy at the start, but everything went down hill when he met Elena. He was exactly like Edward Cullen. Actually, Edward was so much more interesting.

Matt, he deserved so much better. Lovely, kind, caring, HUMAN, Matt. In this book, he got treated like crap. He had his heart broken by a girl who couldn't keep her eyes from walking everywhere. Sigh, I really liked Matt, it would have been nice to see him happy.

I'm not even going to start talking about the others. What a headache.

2) Writing Style & Plot
They're both SO bad I just HAVE to talk about it. One, the writing style of L.J. Smith. Terrible. I wanted to fall asleep, no description, which left me without a picture in my mind. Two, the plot from the imagination of L.J. Smith. Terrible. Eventhough she did come up with the whole Vampire idea first, she did a bad job. Stephenie Meyer might have got a bit of inspiration from the Vampire diaries but at least she made it a bit different and exciting.

I rate this book: