I'm excited to tell you that.....Georgia Twynham, author of The Thirteenth series is here! You don't know who Georgia is? Keep reading! 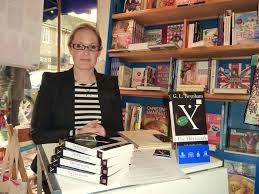 About the author:
I’m a geek who loves to talk far too much. Although that comes in handy now, as I spend a great deal of time in schools, motivating children to have the confidence to write. I love running, and spending time on Facebook and any other social network that will have me. My dream is to complete the Thirteenth Series and then see it on the big screen. My greatest achievement to date is my very cool 11yr old daughter – and she loves my books!

Georgia Twynham is the author of the Thirteenth series that is popular in the UK. You can reach her: On Facebook, On Twitter, At her website

Here is the summary of The Thirteenth, the first book in the series! 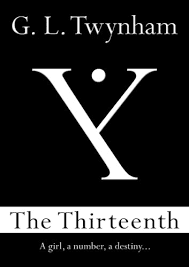 The Thirteenth (The Thirteenth #1)
Imagine starting at the end and finishing back at the beginning. This is the story of a teenage girl called Valerie Saunders who is about to be thrown through time and space. Being bestowed with abilities beyond her wildest nightmares, she discovers that she not only has to deal with turning eighteen, her first job and an un-wanted tattoo, but also magical powers and intense urges to fall in love. She envisaged she would spend her life blending into the scenery, not blowing it up!

You can read the first chapter HERE.

You can read MY REVIEW of The Thirteenth HERE.

After reading that you must be REALLY excited! So here is the interview I had with Georgia!

Where did the idea for The Thirteenth come from?

I grew up loving science fiction and fantasy - in particular Flash Gordon and Star Wars. I felt there was a niche in the market for girls; a female super hero they could look up to. I suppose Val is everything I ever wanted as a child.
What/Who inspired you to write?
J.K. Rowling. I read Harry Potter at one of the lowest points in my life and was fascinated by this single mother on benefit who had created such an amazing story. I was so shocked I decided I would try and a write book – I was a single mother at the time, very odd assumption I guess. Still not sure how that worked, but I’m still doing it.
In 10 words describe your book.
A breath-taking ride you wish would never, ever end!
What can people expect when they read The Thirteenth?
Action, friendship, twists, turns, fantasy and sci-fi. On-the-edge-of-your-seat situations and a group of friends that you will just want to spend time with.
Horror or Romance?
HORROR. I’m reading The Omen right now and my Christmas read is Stephen King’s Carrie.
If you could have one superpower what would it be?
Invisibility – to just move among people and them not know! Awesome!
What book do you wish you could have written?
The Time Machine by H. G. Wells.
Harry Potter or Twilight?

Hands-down Harry Potter – although respect to Stephanie Meyers.
In 10 words, tell everyone why they should read your book.
If you love strong women with super-powers, read it!
So, now is the moment you've all been waiting for....THE GIVEAWAY! Georgia has kindly offered to give FIVE lucky people the first two books in The Thirteenth series! (E-Copies)