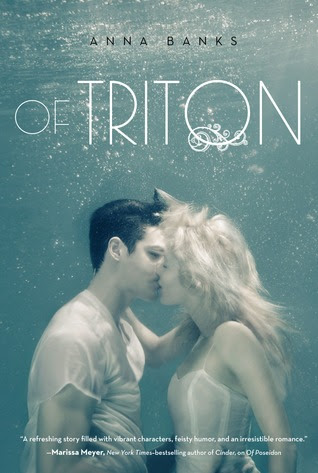 Of Triton (Of Poseidon #2) by Anna Banks
Release Date: May 28, 2013
In this sequel to OF POSEIDON, Emma has just learned that her mother is a long-lost Poseidon princess, and now struggles with an identity crisis: As a Half-Breed, she’s a freak in the human world and an abomination in the Syrena realm below. Syrena law states that all Half- Breeds should be put to death.

As if that’s not bad enough, her mother’s reappearance among the Syrena turns the two kingdoms—Poseidon and Triton—against one another. Which leaves Emma with a decision to make: Should she comply with Galen’s request to keep herself safe and just hope for the best? Or should she risk it all and reveal herself—and her Gift—to save a people she’s never known?

That cover is just... AHH, I love it! I haven't read Of Poseidon yet, but I've ordered it and it should get here soon. (I hope.) I have not read the blurb for this book, I quickly copied and pasted it from Goodreads so I wouldn't spoil the first book for myself.

Have you guys read Of Poseidon? Please tell what you thought of it! From what I've heard, it's meant to be absolutely amazing and the characters are meant to be wonderful, especially Galen? I have no idea! I want the book in my hands NOOOOOOWWWW.