My review of Angelfire

First there are nightmares.
Every night Ellie is haunted by terrifying dreams of monstrous creatures that are hunting her, killing her.

Then come the memories.
When Ellie meets Will, she feels on the verge of remembering something just beyond her grasp. His attention is intense and romantic, and Ellie feels like her soul has known him for centuries. On her seventeenth birthday, on a dark street at midnight, Will awakens Ellie's power, and she knows that she can fight the creatures that stalk her in the grim darkness. Only Will holds the key to Ellie's memories, whole lifetimes of them, and when she looks at him, she can no longer pretend anything was just a dream.

Now she must hunt.
Ellie has power that no one can match, and her role is to hunt and kill the reapers that prey on human souls. But in order to survive the dangerous and ancient battle of the angels and the Fallen, she must also hunt for the secrets of her past lives and truths that may be too frightening to remember.

Angelfire is a brilliantly written book full of action and forbidden romance. There's characters that you can't get enough of and scenes that you'll wish would never end. This is the first book in the unique and exciting Angelfire trilogy.

Ellie, an ordinary girl who loves to hang out with her friends, she thinks she is a normal seventeen-to-be girl. Until the handsome Will comes along. He awakens something deep inside her, something she never knew was there. She soon gets sucked into the world of reapers and unnatural creatures that she must kill with the power that she has found. I loved reading about Ellie, she is an easy-going girl who I could relate to. She isn't perfect and she feels everything that a normal teenager feels. 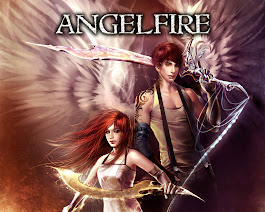 Will is a strong character. He tries to keep his emotions hidden but he can never hide them from Ellie. It was good to see that boys do have feelings. In lots of books, the main male character is too 'tough' and 'badass' to tell anyone how he really feels, so I'm glad that Will is different!

Ellie and Will have a complicated relationship that will find extremely irritating at times. You see, Will is Ellie's Guardian, he isn't allowed to feel anything for her because it isn't part of his duty. My brain was screaming: STUFF THE STUPID RULES! YOU BELONG TOGETHER. There was so much getting in the way, the reapers that were attacking them every two minutes! Courtney describes characters and scenes in a lot of detail. I had a really clear picture in my head all the way through.

Overall, Angelfire is a great book filled with family, love and friendship situations, but also A LOT of amazing action that will keep you up for hours.