My review of All in the Half-Vampire Family 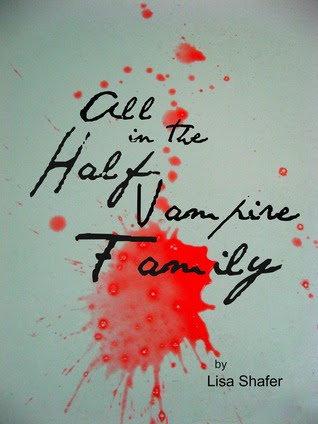 Think you’ve got a weird family?

Eric’s mother is clearly in love with Patrick, who just happens to be Eric's first cousin once removed. And a vampire. Eric thinks Patrick would be the world’s coolest step-dad, but Mom’s in no mood for matrimony.

Worse than that, Mom's side of the family hasn't spoken with her in Eric’s entire lifetime -- at least not until Eric and his way-too-attractive cousin Ari both win a piano competition that takes them to the Edinburgh Fringe Festival. And into the path of Eric’s biological father, a vampire who’s recently begun attacking the locals at night.
But things get really creepy when Eric's dad finds Ari to be... tasty.
Can an accidental family reunion get any stranger than this? Eric doesn’t think so. And neither does the self-proclaimed vampire hunter staying right next door to him in the dorm.

It’s going to be one heck of a summer vacation.

All in the Half-Vampire Family is the follow-up sequel to the hilarious Confessions of an Average Half-Vampire. Get ready to dive back into a young vampire's world, experience Scotland and appreciate good humor!

Our young vampire is exploring the Scotland culture in this book, after being part of the few finalists to compete in a piano competition and led to Scotland's Edinburgh Fringe Festival. But not everything is smiles and sunshine. One of the pretty girls from the competition is getting on his nerves, his mother is in love with a vampire, and Eric's father is causing more mayhem than anyone could have expected. Can Eric make it through his summer vacation without drama?

Lisa Shafer has opened up a new world in front of us to explore and experience. I found out plenty about the Scottish culture and festivities, but I also got a glimpse of the dark and wild side of living in Eric's world of vampires. I enjoyed some of the new characters, but at times I simply thought they were irritating and I could not have cared less whether they lived or died. Ari, for instance, is a girl who has absolutely no manners or even a good personality. She was there to annoy everyone and shout irritable things at Eric.

All in the Half-Vampire Family is an entertaining read and I would definitely recommend it to youngsters out there who want a good laugh and some decent action.

A review copy was provided by the author.
Posted by Sam at 09:00