I'm ecstatic to be part of The Blessed blog tour today! 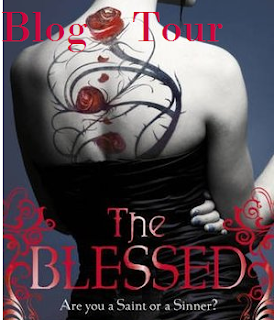 The Blessed (Blessed #1) by Tonya Hurley
Release Date: August 2, 2012
Goodreads | Amazon UK | Amazon | The Book Depository
Brooklyn teens Lucy, Cecelia and Agnes find themselves in the emergency room at Perpetual Help Hospital at the lowest point in their lives. Lucy, the superficial party girl; Cecelia, a drop out rock chick; and Agnes, a hopeless romantic. All rebels running from their lives and themselves, plagued by broken hearts and broken dreams. Enter Sebastian. Mysterious, compelling, seductive. He seems to bring each of them what they long for...

But in the battle for his heart, will they lose their souls?


I read The Blessed last week, you can check out my review HERE! Now for a Q&A with the author, Tonya Hurley.

How did you get the idea for The Blessed?

I was reading stories about ancient female martyrs and it struck me how young these girls actually were when they were killed and how deep a faith, love actually, they possessed that they would willingly sacrifice themselves.  I began to wonder if that sort of passion existed today and one thing sort of led to another. For me, these legends are actually some of the earliest YA stories.
Who is your favourite character from the book?
I can't really name a favorite.  I really enjoy writing each of them and there are bits of myself and people I know in each of them.  Maybe Cecilia, because of the NY music connection.
Do you prefer the US or the UK cover of The Blessed?
They are both very different and both cool, I think.  Both fit the book.

UK | US
Are you working on any other projects?
I'm writing the second Blessed book now and I've just completed a ghostgirl Xmas novella for Autumn release.
In 10 words tell readers why they should read The Blessed.
It's different from any other young adult novels you've read.

About the Author:
New York Times bestselling ghostgirl author, Tonya Hurley, has credits spanning all platforms of teen entertainment. Her first novel, ghostgirl was an instant best-seller and has received starred reviews from the literary publications Publishers Weekly, Kirkus, VOYA and School Library Journal. Her second book in the series, ghostgirl: Homecoming, was released July 1, 2009. The ghostgirl audiobooks are narrated by Parker Posey with original music by Vince Clarke. The thrid book in the series, ghostgirl Lovesick was released on July 12, 2010. The first book in Tonya's upcoming trilogy THE BLESSED will be released by Simon & Schuster September 25, 2012. She is represented by William Morris Endeavor and is a member of Writers Guild of America.


Thank you Hachette Children's Books for providing a UK paperback copy of The Blessed for the giveaway! This giveaway is UK only.

Have a great week,

Email ThisBlogThis!Share to TwitterShare to FacebookShare to Pinterest
Labels: UK ONLY GIVEAWAY