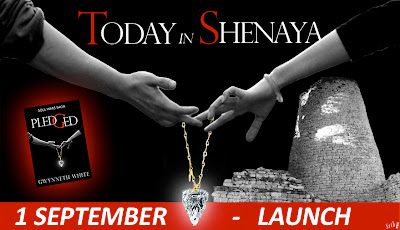 I am part of the Pledged book launch and I have been given an excerpt of the book for your reading pleasure. For those of you who have not seen or heard about the book before, here is the blurb:

Who is your favourite character from the book?
Jared. I’m in love with him. In my mind, he’s the perfect blend of a bad-good guy. Warlord of Shenaya, he’s not your classic good-looker, but he’s got a strong, commanding face, which pretty much tells the world what he’s about. When you first meet him, you’ll find him sardonic and egotistical. But if you win his heart, he will be loyal to you unto death.

Are working on any other projects?
Pledged is the first book in the Soul Wars Saga trilogy. The next in the series, Sacrificed, will be released in January 2013. And the final book is due out in June 2013.

In ten words tell readers why they should read Pledged.
Only ten words? Hmm . . . I think I can manage that: So many twists, you’ll get friction burns from page-turning.

Thanks for coming on the blog and have a great week,
Sam :D
Posted by Sam at 15:07