This is my stop on the Saving June blog tour! 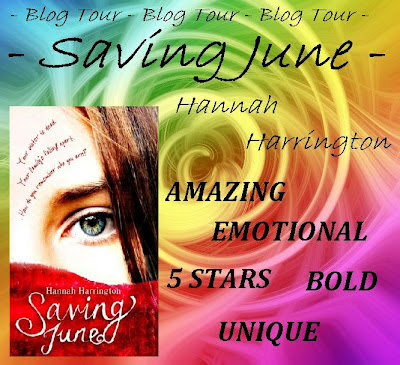 Today I will presenting to you, Saving June by Hannah Harrington. It is a favourite in the US and Austrailia, now it is time for it to shine on British bookshelves! Curious? Want to know what it's about?

‘If she’d waited less than two weeks, she’d be June who died in June. But I guess my sister didn’t consider that.’
Harper Scott’s older sister has always been the perfect one so when June takes her own life a week before her high school graduation, sixteen-year-old Harper is devastated. Everyone’s sorry, but no one can explain why.
When her divorcing parents decide to split her sister’s ashes into his-and-her urns, Harper takes matters into her own hands. She’ll steal the ashes and drive cross-country with her best friend, Laney, to the one place June always dreamed of going, California.

Enter Jake Tolan. He’s a boy with a bad attitude, a classic-rock obsession and nothing in common with Harper’s sister. But Jake had a connection with June, and when he insists on joining them, Harper’s just desperate enough to let him. With his alternately charming and infuriating demeanour and his belief that music can see you through anything, he might be exactly what she needs.

Except June wasn’t the only one hiding something. Jake’s keeping a secret that has the power to turn Harper’s life upside down again.

You can read my review of Saving June HERE!

Saving June was released on June 1st here in the UK so it should be in your local book shops by now! If your in the US or Austrailia it'll probably be available everywhere!!


Here is my Q&A with Hannah Harrington!

Where did the idea for Saving June come from?

I first had the idea for Saving June while I was in high school. When I was seventeen, I'd lost a relative of mine to suicide and the "splitting the ashes" thing was something that actually happened. The summer after I graduated, I was living out of my car and working as a pizza cook. The radio would always be on in the kitchen, so I was spending a lot of time listening to music and kicking the idea around in my head. A few years later I found some of the bits and pieces I'd written back then, and decided to sit down and write out a full first draft. So some of it comes from my personal experiences, and of course some of it is inspired by music I love. It all ended up tying together!

Who is your favourite character from the book?

I love all of the characters! Jake may have been my favorite to write, just because he is so unfiltered and snarky all of the time.

What other projects are you working on?

My next book, SPEECHLESS, will be published by Harlequin Teen at the end of August. It’s the story of a girl named Chelsea Knot, who takes  a voluntary oath of silence after her gossip-mongering ways get her in big trouble.

What advice would you give to aspiring writers?

Keep writing! The more you write, the better you get. I also think a good idea is to look at the books you’ve read and loved and try to figure out what about them strikes you so much, and try to keep that in mind for your own writing.

Don't forget to check out Saving June at a bookshop near YOU! This is one of the song's from the playlist: