My review of Clockwork Angel

Clockwork Angel is a brilliant story of romance and power. An amazing prequel to The Mortal Instruments series. 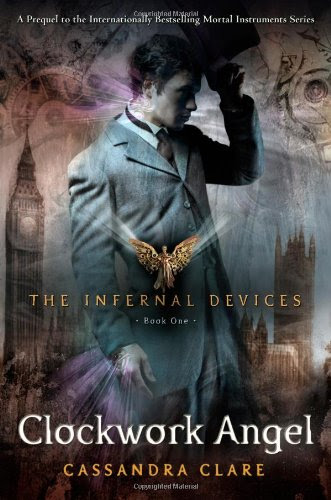 When sixteen-year-old Tessa Gray crosses the ocean to find her brother, her destination is England, the time is the reign of Queen Victoria, and something terrifying is waiting for her in London's Downworld, where vampires, warlocks and other supernatural folk stalk the gaslit streets. Only the Shadowhunters, warriors dedicated to ridding the world of demons, keep order amidst the chaos.

Kidnapped by the mysterious Dark Sisters, members of a secret organization called The Pandemonium Club, Tessa soon learns that she herself is a Downworlder with a rare ability: the power to transform, at will, into another person. What's more, the Magister, the shadowy figure who runs the Club, will stop at nothing to claim Tessa's power for his own.

Will, such a charming young man. We all know who he's related to? Jace, of course! (If you don't know who Jace is, then read The Mortal Instruments Series). They both share the same qualities: rude, arrogant, mood swings. You see where I'm going with this? Turns out, I had a re-read of City of Glass and found out Jace Wayland is actually Jace Herondale, which makes Will and Jace related some how.

Tessa, she was a beautiful character, with a lovely personality. She grew more and more as a person through out the book. Her courage and determination, led me to admire her. She also possessed some similar qualities to Clary from TMI.

The plot was interesting, there was a lot of action, that involved ruins, etc... Thinking about them makes me want to get a tatoo....

Cassandra's writing style is addictive! I do hope she writes another set of good books that have something to do with Shadowhunters. Since I've already read Clockwork Prince, I have to sit at my computer, scroll through a terribly long list of books, until Clockwork Princess comes out!

I rate this book: