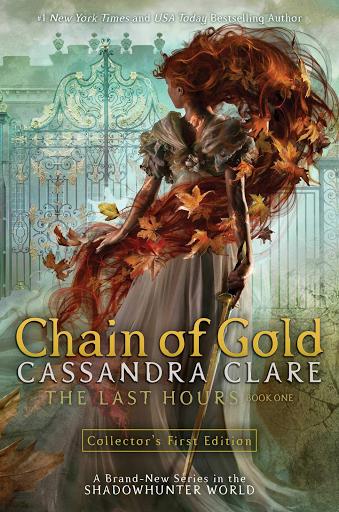 Cordelia Carstairs is a Shadowhunter, a warrior trained since childhood to battle demons. When her father is accused of a terrible crime, she and her brother travel to London in hopes of preventing the family’s ruin. Cordelia’s mother wants to marry her off, but Cordelia is determined to be a hero rather than a bride. Soon Cordelia encounters childhood friends James and Lucie Herondale and is drawn into their world of glittering ballrooms, secret assignations, and supernatural salons, where vampires and warlocks mingle with mermaids and magicians. All the while, she must hide her secret love for James, who is sworn to marry someone else.
But Cordelia’s new life is blown apart when a shocking series of demon attacks devastate London. These monsters are nothing like those Shadowhunters have fought before—these demons walk in daylight, strike down the unwary with incurable poison, and seem impossible to kill. London is immediately quarantined. Trapped in the city, Cordelia and her friends discover that their own connection to a dark legacy has gifted them with incredible powers—and forced a brutal choice that will reveal the true cruel price of being a hero.
Chain of Gold is a spin-off series I have been waiting for for years. Ever since Clockwork Princess left my heart shattered and soul in tatters, I knew that a series essentially following the children of my favourite characters would hit the spot.
Set in the 1900s, this book gave me Bridgerton vibes. If you watched the show and loved the balls, courting, etiquette, cute walks in the park, then you will love this. It was the perfect backdrop for these characters and the plot. This book does follow the usual Cassie Clare/Shadowhunter recipe: there are demons, a larger sinister overarching plot, and amazing character relationships that you can't help but feel so invested in.
The characters we follow include James and Lucie Herondale, Matthew Fairchild, Cordelia Carstairs, Thomas Lightwood, Christopher Lightwood, Thomas Lightwood, to name a few. So as you can see we are following the children of the characters we met in The Infernal Devices. Seeing our favourite characters as parents was so special and made me love the book before I even started. However, despite enjoying the large cast of main characters who took turns in the spotlight of this book, it did mean that we did not get the full depth of character development for all of them. This left me with the feeling that I knew I liked them, but there was still a lot I didn't know about them. There was a disconnect in some way. I hope this is an issue that solves itself in the sequel Chain of Iron. This book was chunky so it is a shame that we couldn't get to know them more in just the first book.

Speaking of CC's recipe, starting this book was so easy. It was so smooth slipping into this world, understanding the dynamics between characters, and just falling back into the Shadowhunter world. I initially thought maybe it would take me a few chapters to be hooked, but by the end of the first chapter, I knew I was going to love it. If you enjoyed the previous books, I do not see why you would fall back easily in love with this story as it is like a continuation of TID. The writing style is easy to follow and even if you may not have read the complete full series there is enough background in this book for you to read this straight away. However, I would recommend you at least read TID before as it helps you understand a lot of the backstories.
I also felt that the plot in this book is not the strongest. Things don't get going until the end, but I did not necessarily mind this as it left a lot of the story open to slowly introducing characters. If you're looking for a whirlwind of action, this may not be the book for you. But if you like the Shadowhunter world and just so happen to have enjoyed Bridgerton just as much as I have, then I think you will appreciate this series!
Overall, I would recommend this book for those who love the Shadowhunter world and especially The Infernal Devices. I can't wait to see where this series goes as the ending to this book had one of my favorite tropes. Hehe.
Rating
4.5 Falling Books
Have you read this book? Let me know in the comments below.
Posted by Sam at 19:36