Interview and Review: The Spark and the Drive

Today I'm here to show you a wonderful contemporary book that you may have missed in the year of 2014: The Spark and the Drive by Wayne Harrison. Below is the cover and blurb, as well as my review of the book and an interview with the author himself! 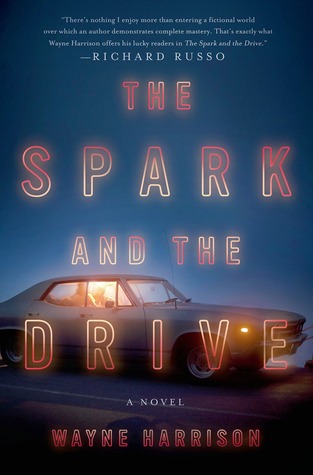 The Spark and the Drive by Wayne Harrison
Release Date: July 15, 2014
Justin Bailey is seventeen when he arrives at the shop of legendary muscle car mechanic Nick Campbell. Anguished and out of place among the students at his rural Connecticut high school, Justin finds in Nick, his captivating wife Mary Ann, and their world of miraculous machines the sense of family he has struggled to find at home.

But when Nick and Mary Ann’s lives are struck by tragedy, Justin’s own world is upended. Suddenly Nick, once celebrated for his mechanical genius, has lost his touch. Mary Ann, once tender and compassionate to her husband, has turned distant. As Justin tries to support his suffering mentor, he finds himself drawn toward the man’s grieving wife. Torn apart by feelings of betrayal, Justin must choose between the man he admires more than his own father and the woman he yearns for.
-----------------------
Review:
The Spark and the Drive is a contemporary novel that hits home the meaning of first love and betrayal. It is easy to fall into the life of Justin as he struggles to find a place where he belongs until he has the chance to work with famous mechanic Nick Campbell. He teaches Justin everything he needs to know as well as making him feel part of a family with his wife Mary Ann and their son. But soon things begin to unravel and Nick begins to lose his hold of his legendary mechanic status, Justin finds himself slowly falling for Mary Ann. And this, my friends, is the plot line that appealed to me in the first place. A complex story of love and betrayal has been woven beautifully by Harrison into a captivating novel that you will devour in one sitting.

I enjoyed the main protagonist of the story Justin as he was likable, real, and so believable as a character. It's not easy to write from the point of view of an eighteen-year-old and to capture their thoughts, feelings and decisions, but Harrison did so brilliantly. We are opened to Justin's life as, once so simple, grows to be much more complicated than anyone could of imagined. We witness his internal struggles as he fights between his wants and what he knows is wrong.

Overall, I would recommend The Spark and the Drive for those who like to read contemporary novels with depth and plenty of tension to keep you hooked. This story is perfect if you're also looking to experience flawless writing by an impressive debut author.

What or who inspired you to write The Spark and the Drive?
I published a short story in The Atlantic about a celebrity mechanic, Nick Campbell, whose technical genius and capacity for imagination transcended his work and gave him a mythic reputation around town. Justin, the narrator, is Nick's perfect witness, young and idealistic, and when Nick's talent starts to wane, when he and his wife suffer the tragedy of losing their baby to SIDS, Justin steps in to try and help but ends up, both intentionally and unintentionally, causing havoc. Afterward, I couldn't stop thinking about the characters, and when the story made it into Best American 2010, a number of agents asked if I had thought about developing the story into a novel. The writing came pretty quickly once the love affair began and the betrayals started piling up, and the storyline became one of those wonderful obsessions writers sometimes discover. I couldn't stop thinking about it when I wasn't writing.

What message are you trying to get across to the readers with your story?
I don't really think about messages in my work, and it seems very easy to become heavy- handed that way. I do hope that whatever messages a reader might take will feel organic and true. Themes I found myself exploring and developing throughout the book were, of course, coming of age, but also displacement, loss, disillusionment and dreams, hero worship, love and loss.

Who is your favourite character from the book?
Mary Ann, the wife of Justin's mentor, would have to be my favorite. She was both the most challenging character and the one I felt most sympathy for. Her heart break wasn't hard to imagine - all parents to some degree are terrified of their children falling victim to something as shocking and mysterious as SIDS - but add to that a husband who has turned frigid, and her grief became profound. She could become consumed by it or survive, and her turning to Justin for comfort and intimacy was a challenge to dramatize accurately. I don't believe that characters must be portrayed as sympathetic, but in the case of Mary Ann, I badly wanted her to be. In some ways I felt I owed it to her, after all she'd been through.

If The Spark and the Drive were to become a movie or TV series, who would you pick to play the main roles in the book?
Great question. All the main characters would, I think, require actors capable of evoking a full spectrum of emotion. Perhaps Ryan Gosling as Nick, the maverick mechanic, brilliant but inarticulate, reticent but full of pathos, driven but powerless in the face of his grief. Natalie Portman as Mary Ann, dignified and confident, tough and candid, vibrant, then demoralized, broken. Josh Hutcherson as Justin, eager, hopeful and sincere. I think he captures the torment of heartbreak especially well.

Are you working on any other projects at the moment?
Right now I'm acually at work on two books. The first is a literary thriller that mines my past job in Corrections. It's about a female corrections officer named Lynn, whose understanding of the criminal mind makes her very good at her job. Her husband is in a rock band that's on the brink of a major record deal, until the lead guitarist is arrested for murdering his wife. Though he has confessed in writing to the crime, he hasn't spoken a word. He's brought into Lynn's jail awaiting sentencing. Lynn finds herself doubting his guilt, and taking outrageous chances that threaten her job and her marriage to prove his innocence.

The second book is a Young Adult novel about a 14 year old boy who has been training to be the youngest person in the world to rock climb El Capitan. (Rock climbing is another of my passions.) When he finds out he has multiple sclerosis he is driven to outrageous free-soloing climbs (climbing big walls without a rope) that threaten not only his life but the lives of those he loves most.

Lastly, sum up in 10 words why you think readers should pick up your book.
Can I chose another author's words? Peter Orner, in his generous blurb, calls the novel, "As intense and well-written a love story as you’ll find."

Don't forget to add The Spark and the Drive to your Goodreads TBR list and you can find Wayne on his website or on his Facebook.