I am here to show you all Swell by Julie Rieman Duck, which is a new adult book that deals with drinking issues.

For those of you who don't know what Swell is about, here is the cover and blurb: 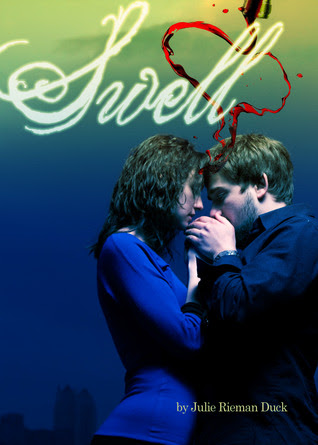 Swell by Julie Rieman Duck
Release Date: September 1, 2012
When Christian Rusch plucks Beck Ionesco from the freshman ranks for himself, she’s tempted with parties, popularity, and love. But as the free-flowing booze that soaks his world seeps into her own, Beck begins using liquid courage as a way to ignore Christian’s dark moods… and cover her anxiety about his flirtatious friend Hillman.

However, when Christian breaks up with Beck, and Hillman makes a dangerous move, no amount of alcohol can stop the pain or keep her out of trouble. And just when it seems like she’s lost everything, Beck is partnered with Jesse Leary for an art project. After spending time with him, Beck realizes it’s more than a study date… and Christian’s not happy about it. Then again, Beck’s not sure she’s happy with him, either.

But only after plowing through a bottle of wine, a wild fight, and one guardrail that becomes Christian’s last call, does Beck admit to her problem and ask for help from the one whose life secretly parallels her own.

About the Author:
Born in Los Angeles and raised in San Clemente, California, Julie Rieman Duck wrote her way through school on an old-fashioned typewriter. Somewhere along the line, she was sidetracked by careers in magazine publishing and copywriting. While Julie honed her skills at writing print ads and articles, the stories that moved her heart and soul were bubbling underneath, waiting to escape.

Julie looks forward to writing more stories that hit where the heart beats fastest, and the soul reaches out for more.

My review:
Swell deals with a big issue: teenage drinking. I didn't exactly feel comfortable reading about it but the author handled it well and gave the book a dark twist to keep you interested. If you love new adult contemporary then Swell is worth checking out.

When our main character, Beck, speaks to Christian Rusch for the first time, she's head over heels. Christian is popular, rich and full of words that can bring girls to their knees. Though Beck doesn't know that Christian has a special relationship with booze, and soon she is tempted by the liquid every single day. Then she meets Jesse Leary, a funny and charming guy who she just can't get out of her head. Fights are started, relationships are broken, and, under all the alcohol, Beck needs to find herself.

I found it very hard to connect with the main character, Beck, since she was reckless, irresponsible and absolutely crazy. I felt that she could have used her brain a tad more to avoid some horrible situations in the book. Anyhow, I did enjoy Jesse, a boy we meet later on in the book who offers Beck support and friendship. He was kind and funny and basically one of the most down-to-earth guys you could ever meet.

Swell wasn't one of my favourite reads, but it was a good pass-time. If your looking for a quick and thought-provoking read then pick Swell up!

- A review copy was provided by the author.

Julie is also hosting this awesome giveaway for you guys to get your hands on her books, Swell and A Place in This Life (you can read my review HERE).
a Rafflecopter giveaway