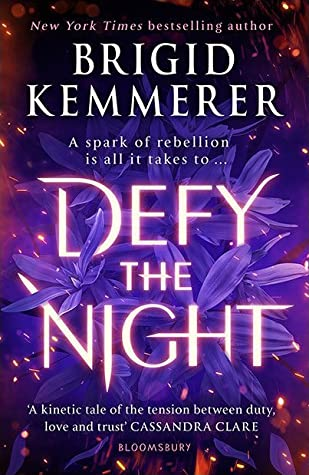 A fantasy series about a kingdom divided by corruption, the prince desperately holding it together, and the girl who will risk everything to bring it crashing down.
The kingdom of Kandala is on the brink of disaster. Rifts between sectors have only worsened since a sickness began ravaging the land, and within the Royal Palace, the king holds a tenuous peace with a ruthless hand.King Harristan was thrust into power after his parents' shocking assassination, leaving the younger Prince Corrick to take on the brutal role of the King's Justice. The brothers have learned to react mercilessly to any sign of rebellion--it's the only way to maintain order when the sickness can strike anywhere, and the only known cure, an elixir made from delicate Moonflower petals, is severely limited.Out in the Wilds, apothecary apprentice Tessa Cade is tired of seeing her neighbors die, their suffering ignored by the unyielding royals. Every night, she and her best friend Wes risk their lives to steal Moonflower petals and distribute the elixir to those who need it most--but it's still not enough.

As rumors spread that the cure no longer works and sparks of rebellion begin to flare, a particularly cruel act from the King's Justice makes Tessa desperate enough to try the impossible: sneaking into the palace. But what she finds upon her arrival makes her wonder if it's even possible to fix Kandala without destroying it first.

When I put this book down for anything I immediately got withdrawals. The writing style and story is so gripping that you don't want to put it down.

The concept of this book was very interesting. There is an illness that is plaguing the people of Kandala, and the only thing that can keep the sickness at bay is moonflower petals. These petals are only grown in 2 sectors of the kingdom, in which the leaders of the sectors have full control over the price. The king buys as much as possible to distribute to all the sectors, but it is barely enough. I loved the idea that there is this finite resource that is being fought over and couldn't wait to learn more about what could be done about this issue. There's a lot of politics involved, which I found myself loving from the start! The worldbuilding was a perfect balance between being easy to understand but still very rich. However, I felt the plot twist and ending reveal was predictable.

The romance was very cute. I loved Tessa and Corrick but there was not much build-up, which is normally one of the best parts. Their relationship throughout the book was fun to follow and I could never get enough of them. Even though they were a bit cheesy at times.

I wanted more details on the moonflower petals. This was one of the most interesting aspects and it didn't get enough time in the limelight. Aside from the politics surrounding the moonflower supply issue, I wanted to hear more about the efficacy of the different dosages, and the differences between sectors. But I suspect this will play a bigger part in the second book, even though it could have been explored further within the 400 pages of this one.

Overall, I did enjoy this a lot. The story made this very hard to put down! I would definitely recommend it to anyone that loves YA fantasy with lots of political intrigue. Especially anyone that liked The Prison Healer by Lynette Noni. This story has so much potential despite the predictable twists and underutilised plot lines, but the main ingredients to be the next hit fantasy series. I am super excited for the sequel because I think it's going to be explosive. There are so many storylines and open ends that I cannot wait to be explored.

4 Falling Books
Thank you Bloomsbury for sending a proof copy!