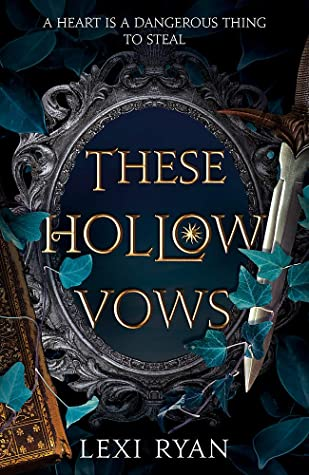 Brie hates the Fae and refuses to have anything to do with them, even if that means starving on the street. But when her sister is sold to the sadistic king of the Unseelie court to pay a debt, she'll do whatever it takes to get her back—including making a deal with the king himself to steal three magical relics from the Seelie court.

Gaining unfettered access to the Seelie court is easier said than done. Brie's only choice is to pose as a potential bride for Prince Ronan, and she soon finds herself falling for him. Unwilling to let her heart distract her, she accepts help from a band of Unseelie misfits with their own secret agenda. As Brie spends time with their mysterious leader, Finn, she struggles to resist his seductive charm.

Caught between two dangerous courts, Brie must decide who to trust with her loyalty. And with her heart.

These Hollow Vows is a YA fantasy that has been recommended for fans of The Cruel Prince and A Court of Thorns and Roses. If you haven't read either of these books then I would recommend this as an "easy to dive into" YA fantasy with a love triangle consisting of two irresistible love interests, as well as an inevitable betrayal. The fae world is divided into the Seelie and Unseelie courts who have been long at war. We follow Brie as she infiltrates the Seelie court in order to find three relics for the Unseelie King who has her sister. While she is there she must play the part of a human who is there to win the hand of the Prince of the Seelie court, (The Selection by Kiera Cass kind of style) Sebastian, who she just might be falling for. However, she also begins to fall for Finn, the leader of the rebels attempting to overthrow the Unseelie King and could possibly be the answer to getting her sister back.

The writing style is very easy to follow in this book. If you are someone that doesn't get on well with heavy worldbuilding in fantasy books and prefers to get stuck straight into the plot, then this book is perfect for you. At certain points, I did find myself wanting for the author to expand on the world further to make this world feel more fleshed out. We spend a lot of time in the Seelie court but at the same time, I feel like I came away still not knowing that much about it or the rules, customs, etc.

The love triangle in this book was written in a way that was enjoyable and kept the reader guessing about who may be the one to win the main character's heart. It is an especially hard decision when you fall for both of the love interests in the book and can't decide who you're are rooting for! Up until the very end, you are kept guessing who Brie might pick. The betrayal trope also plays a big part in the romance so any fans of big twists such as those in Red Queen by Victoria Aveyard I think you will enjoy what this book has in store!

Brie was not my favourite main protagonist. I found myself frustrated with her inner thoughts and her choices. I also could not believe how much she got away with sneaking around the castle and its grounds. Even when she was with the rebels for a few days under the guise of visiting a seaside town, Sebastian did not even ask her about this "trip" once when she got back. I thought this was a little too easy of a way out for Brie to not have to deal with the possibility of being exposed. Every moment thereafter I was then not worried that she would get caught because everyone was so gullible and never questioned her. I would have like less predictability from this aspect of the plot.

If you enjoy romance as the main driver in your fantasy stories then I think this would be a good pick for you! It doesn't have the heavy worldbuilding that can feel very dense, it jumps straight into the plot, and there is only a sprinkle of political intrigue. Overall, These Hollow Vows is an addictive read that you will not be able to put down. The romance will keep you guessing at every turn and you are waiting on the edge of your seat for all secrets to unravel. I am looking forward to seeing where the author takes this story in the sequel!

Thank you to Hodder & Stoughton for providing a review copy