I'm a big, big fan of the books and I was very excited for the film considering I've been following the books for a few years now. I watched it last Tuesday and walked out of the cinema feeling pretty happy! I was happy with the scenes, the humor, the action, the actors, and I came to like Jamie Campbell as Jace, after hating on the cast selection for so long.

It's always important to the fan of the books that they don't change much in the movie, right? Well, I'm please to say that they didn't change too much. One thing that they did change though, was Simon turning into a rat. Nope, that never happened. Not that I minded, because we just got to see more of Robert Sheehan's face, but it would have been nice for them to keep that part in.

After watching the movie, I looked up some reviews and saw that critics hadn't been very pleased... AT ALL. Many have given it 1 star, or at most 2, and have even had the nerve to compare it to Twilight! Fine, I can see how they may have some meeting points, like the love triangle and the wolves and vampires, but that's where the similarities end!

I'm sorry if I start bashing Twilight, but that's just because the movies were truly awful (but Stephanie Meyer did a wonderful job with the books), and I don't think that City of Bones deserves to be compared!

Everyone is like, "OMG, save our souls from another YA book to movie!" When these people have NEVER read the book and just assume that it's always the same. Well, y'all need to shut the hell up and run along and read the books and not assume that all YA books to movies and not all trying to copy "The Hunger Games" my having a feisty female lead. But all that jazz and speculation deserves its own post to discuss it. What is important, is that The Mortal Instruments is unique and people just need to give it a chance before judging it as another YA movie fail like "Beautiful Creatures" was.

Here are some of the things said by critics and featured on Rotten Tomatoes:

"This desperate Twilight wannabe hits more than its own share of clunky notes."
"It desperately gathers clichés like a teen fantasy Frankenstein that doesn't realize its secret identity: parody."
"Who cares about a life-or-death battle with evil spirits when there's angst-ridden teen relationship drama in the mix?"

Now, what have we got here? To be completely honest, I feel like they were a tiny bit harsh. Especially the third one about not being able to enjoy the action because of the romance? WHAT?

I have no idea whether the critics were simply being unnecessarily harsh, feeding off each other, or just saying what they feel, but the movie did not deserve that! Of course, I am no movie critic, or movie reviewer, but I know when people are being unfair when I see it!

On Rotten Tomatoes, it says that 71% of the users liked it, and this was based off over 27,000 ratings. They seemed to enjoy it? I've even seen people who share my view of the critics being a bit to harsh. Some have even thought about not going to see it because of all the negative reviews from the critics, but have ended up loving it?

I simply don't understand how Twilight made it so far... The first movie was a mess of terrible acting from Kristen Stewart and nothing happening in general. But the next 4 movies were definitely to do with Taylor Lautner's lack of upper body clothing. Surely, people will want to watch characters with EMOTIONS and HUMOR and decent action and a set of much more interesting characters, no?

They are not giving any credit to the actors, who did an amazing job bringing the characters from the book to life! I loved the humor that Jace and Simon brought to the screen! Did I laugh? Yes. Did I cry? (Even though I hate to admit it) Yes. (BUT FOR GOOD REASONS! It was the Simon scene. Gif below) Did I love it and fall about on the floor begging the heavens to give me the next 5 movies? Yes.... well, I didn't fall to the floor, but yes I did really love it!

--------------------------------
Jace: In future, Clarissa, it might be wise to mention that you already have a man in your bed, to avoid such tedious situations.
Simon: You invited him into bed?
Jace: Ridiculous, isn't it? We would never have all fit.
Clary: I didn't invite him into bed,We were just kissing.
Jace: Just kissing?How swiftly you dismiss our love.
-------------------------------
Lily Collins portrayed Clary very well, I thought. She has the image and she has the attitude. Even though I was not too keen on her being selected to play the role at first, when I watched the trailer I knew she was perfect. And watching the movie just made me a very big fan of her's! She is a very good actress and I'll need to check out more of her films. With Jamie Campbell, I honestly, honestly HATED him. He looked strange in Twilight and I didn't understand why the casting directors had picked him over Douglas Booth and Max Irons, two very popular actors who also auditioned for the role, I even thought of hunting Alex Pettyfer and making him accept the role that was offered to him in the first place. But, after getting into the movie, getting use to Jamie's face and his attitude to Jace's character... I really liked him! He didn't play Jace as... snarky as in the book, but he did bring his own level of humor and arrogance to the role.
ROBERT SHEEHAN! I cannot praise him ENOUGH! He was perfect. Even better than I was expecting. He even looked better than how I imagined Simon in my head. He pulled off the geeky look very well! I loved, loved, loved him! And I cannot wait to see him sexay face in the next (hopefully) 5 movies.

Of course, I have to agree with some reviews, the CGI was occasionally dodgy, but that was only on a small number of a occasions. Apart from that, I was seriously impressed with how they made the Institute, and the wolves, etc. OMG, the Silent Brothers really scared me. 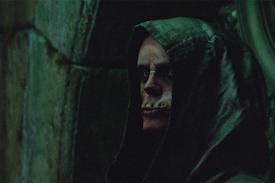 ANYWAYS, I ADORED the film and y'all need to stop hating so much considering how much work has gone into it. I'm just grateful that it's on the big screen! I CANNOT WAIT FOR CITY OF ASHES!! For all you who don't know, they are beginning filming City of Ashes on September 23rd, and will be released in 2014. GIVE IT TO ME NOW!!

To all those who haven't seen the film but are too scared to because of the critics' reviews.... JUST GO! Most fans of the book that I've heard from have loved it and I'm sure you will too. If you don't love it, oh well, at least you gave it a try.

Please feel free to leave your opinion on what I have said/or the movie in the comments because I would love to hear what you think.