Today I am here to reveal the cover of Becoming by Samantha Summers, which is the third book in the Project Five Fifteen series after First Light and As You Were. This is a action/thriller/romance YA series that is very addictive!! Check out my reviews here: First Light and As You Were. 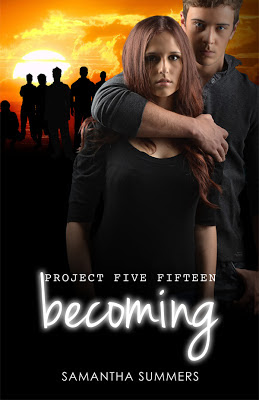 Turning his back on the killer he was trained to be wasn’t as easy as Kalen Smith had hoped. They’d tried to run. They’d tried to hide. People had lost their lives. The wrong people. Now, driven by a thirst for revenge, Kalen and his team are preparing to take down those responsible.

But vengeance comes at a price and Ronnie can feel the boy she fell in love with slipping away from her, as the darkness he’s been running from for so long threatens to consume him.

With danger looming in every direction, the possibility of a happy-ever-after is looking bleak, but The Agency isn’t the only obstacle in the way of Ronnie and Kalen’s future. Ronnie’s harbouring a tragic secret that isn’t hers to keep and the truth could destroy not only their relationship, but what’s left of Kalen’s humanity.

Becoming will be available on October 31st. The other books are all available.