Happy book birthday to The Ash House by Angharad Walker! Today is it's official UK release. 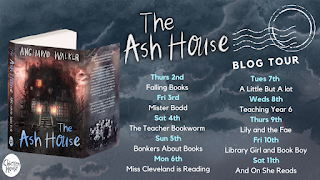 Welcome to the first stop on the blog tour for The Ash House, a chill-you-to-the-bone children's story that will leave you feeling breathless as well as unsettled. You can find out more about the book below. 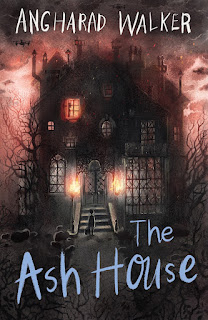 When Eleven-year-old Sol arrives at the Ash House, desperate for a cure for his complex pain syndrome, he finds a community of strange children long abandoned by their mysterious Headmaster.

The children at the Ash House want the new boy to love their home as much as they do. They give him a name like theirs. They show him the dorms and tell him about the wonderful oasis that the Headmaster has created for them. But the new boy already has a name. Doesn't he? At least he did before he walked through those gates...

This was supposed to be a healing refuge for children like him. Something between a school and a summer camp. With kids like him. With pain like his. But no one is allowed to get sick at the Ash House. NO ONE.

And then The Doctor arrives...

Strange things are about to happen at the mysterious Ash House. And the longer Sol spends on the mysterious grounds, the more he begins to forget who he is, the more the other children begin to distrust him, and the worse his pain becomes. But can he hold onto reality long enough to find an escape? And better yet, can he convince the others.

I was lucky enough to read a proof of this book before the release. The story plays on magical realism and brings The Ash House to life in a way that will keep you thinking perhaps you're reading something paranormal. Everything about this book felt so vivid and you are quickly drawn into this world where everything seems to make sense to everyone but the main character and us, the reader. Over the course of the book, we learn more and more about the Ash House and the secrets that lie deep within it. The tension by the end of the book was palpable and I had no idea what to expect. I experienced so many emotions while reading and even having finished it my mind can't seem to fully comprehend the wild ride that is this story. It is absolutely unforgettable and terrifying in the best way. If you are someone that enjoys having their boundaries of reality pushed to the edge, this is the book for you.

I am twenty-two years old, and there were parts of this book where I was so spooked out, I was sure the scenes would play out in my nightmares. However, I have a low tolerance for spooky things, and I know many readers will love how chilling this book is.

Anyway, enough from me! The lovely Angharad Walker has put together the inspirations behind The Ash House that gives you such a great insight into the makeup of this story.

Hi Falling Books readers! It’s the first stop of The Ash House blog tour and I’d like to say a
special thanks to Sam for having me on Falling Books to celebrate its publication.
The Ash House is about a boy who is looking for a cure to a mysterious illness he has. He
arrives there hopeful, only to find a house made of ash ad smoke. A group of children like
there, living by the strict rules of Nicenesses set by their Headmaster. Only they haven’t seen
him in three long years…
Sam’s asked me to write about the ideas and inspirations behind the book, so here’s a little
peak into the (chaotic) mind of this writer…
The initial idea
Everyone always wants to know where the first spark of a story comes from. I hate to
disappoint, but I don’t have a particularly satisfactory origin story for this book. I honestly
can’t remember if the Ash House came to me in a daydream or a nightmare. I was still a
student at university. I was studying in California for the year. I loved it there, but I missed
the seasons of the UK, particularly autumn–the grey skies, fine rain, turning leaves. Perhaps
the Ash House came out of that craving. All I know if one day it was there in my head: a
house made of ash and smoke, deep in the countryside, surrounded by gnarled, ancient
woodland. I knew I wanted to write about it.
Thinking up characters
It’s funny because characters can feel like people all their own, even though you created
them. I knew I wanted to write a story about friendship. To guide the reader through the
world of the Ash House I needed a lead character who was an outsider, and another who was
the ultimate insider. That’s Sol and Dom, the two boys at the heart of the story. They both
need what the other has. Sol needs something to believe in. He needs to shed his cynical
shell. Whereas Dom needs to face up to the harsh realities of the Ash House—it’s not the
perfect world he thinks it is.
Perfecting a plot
I worked really hard on the plot. It’s not something that comes naturally to me. I actually
quite like books that meander and give the characters lots of time to have random
conversations. But I appreciate I’m in the minority of that! So to figure out the right plot for
my world and characters, I tried to think about what type of story it is at its heart. That’s
when I realised: it’s a prison break story. Prison break stories all have certain features that
make them gripping to read or watch—a reason they must escape, a ticking clock to give a
sense of urgency, some failed escape attempts with the stakes rising with each failure. When I
slotted my ideas to this structure, that’s when the book really came alive.

You can find links to purchase The Ash House by Angharad Walker below. Including the signed edition offered by Waterstones! 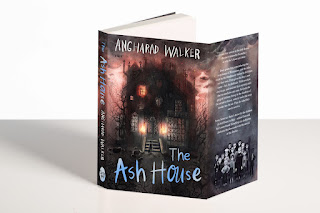