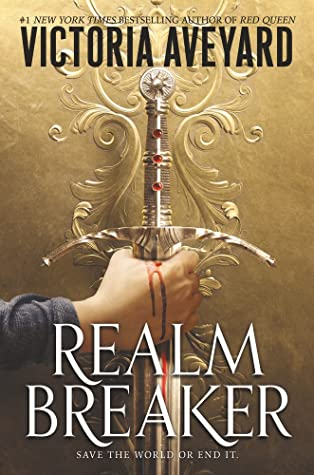 A strange darkness grows in Allward.
Even Corayne an-Amarat can feel it, tucked away in her small town at the edge of the sea.
She soon discovers the truth: She is the last of an ancient lineage—and the last hope to save the world from destruction. But she won’t be alone. Even as darkness falls, she is joined by a band of unlikely companions:
A squire, forced to choose between home and honor.
An immortal, avenging a broken promise.
An assassin, exiled and bloodthirsty.
An ancient sorceress, whose riddles hide an eerie foresight.
A forger with a secret past.
A bounty hunter with a score to settle.
Together they stand against a vicious opponent, invincible and determined to burn all kingdoms to ash, and an army, unlike anything the realm has ever witnessed.
Realm Breaker is the start of a high fantasy series led by a cast of delightful characters that form an unlikely team to save the realm.
From page 1 there is a lot of detail and we are thrust into the world. Immediately we meet a lot of characters and we are in the middle of the action which becomes the plot of the entire book. I won't lie, I was confused. There is a lot of mention of "Spindles" without there being any full definition of what this is. It then becomes the root of many other words used in dialogue "Spindlerotten", "Spindleblessed", "Spindleborn", and I found myself having to guess and not dwell on it too much. I got the hang of it around 100 pages in but I would have liked a bit more explanation as there were other aspects of the worldbuilding that were described in such great detail I expected that to carry through. Even now I'm trying to remember what a Spindle is and I could not tell you confidently. Aveyard does however do a brilliant job at thrusting us into the world of Allward and taking us on an adventure through the different backdrops of the realm. If you're someone that enjoys high fantasy world-building you will enjoy what this story has to offer. We get to explore the palace, pirate ships, desert lands, and so many more unique places in this world. Definitely cross-check the map!
From the plot and the characters, I was hoping this would be a similar set-up to Six of Crows by Leigh Bardugo. And to a certain extent, it was in terms of its multiple POVs. However, it did not match the level of epicness I was expecting. Maybe this will be built upon in the sequel? Our main characters are on a quest and to fulfill it they have to get out of some pretty sticky situations. They each bring something unique to the table and all-in-all had great voices in this story. We have a daughter of a ruthless pirate whose blood is crucial to saving the realm, a very lovable squire, a tough on the outside but soft on the inside immortal, a quickwitted assassin, and a young queen at the heart of the story who's actions I could never predict! There are other characters who are introduced later that were almost glossed over that I did not actually care about their whereabouts in the scenes. Even though the book swapped through a lot of POVs, I did not mind at all. Usually, with multiple POVs I find myself favoring certain characters over others, but I really enjoyed all of them in this book. The story was heavily plot-driven and there were points where I really wanted it to focus more on the characters. The result of this is characters with unclear motivations and stakes in the overall arching plot. I really hope this is something that is worked on more in the sequel as the author has set up a good foundation for her characters but they need to be fleshed out a bit more.
My main issue with this book is that I felt there was no real climax in the plotline. Realm Breaker acts as a set-up for the plot and just as things start to get interesting it is already the end of the book and we're left to wait for the sequel. About halfway through there was a major twist that had me gasping, but other than that I felt I was waiting for things to happen. Ayevard does put in a classic betrayal twist that she is so well known for from her Red Queen series.
For anyone who's wondering whether there are any underlying romance storylines in this book, yes however they are very subtle. Our characters are just getting to know each other here and are busy trying to save the realm so the romance storylines are very much muted. It could however mean we get a really awesome slow burn romance that picks up in the next book.
I would recommend Realm Breaker to anyone that enjoys high-fantasy and a story told from multiple POVs. All of the characters are interesting with their own unique backstories which I hope is going to be explored in future books. Overall, Realm Breaker is a good start to the series and I will be reading the sequel to find out what happens next.
Rating
3.5 Falling Books
Thank you Harper Teen for providing me with an ARC.
Posted by Sam at 17:11